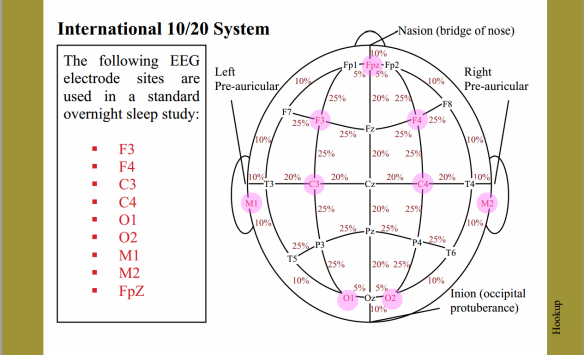 Subscript indicates side of the brain the electrode is located

(The higher the number within a lobe, the farther the electrode is located from the midline) 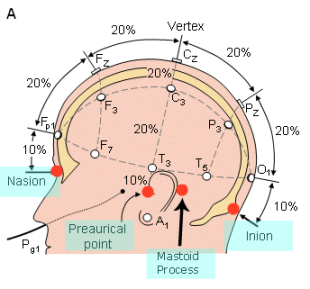 1. Nasion – The bridge of the nose or lowest indentation point between nose and forehead

2. Inion – Bony ridge at the base of the back of the skull. Have patient tilt head up and down to feel it better.

3. Pre-auricular points – Indentations just above the cartilage that covers the external ear openings

Pre-auricular to Pre-auricular
Follow the same procedure as above making sure your tape measurer passes over the Cz point. Note the total measurement in centimeters then mark your T7, C3, Cz, C4, and T8 points according to the percentages specified on the chart.

Head Circumference
Measure around the circumference of the head from Fpz with tape measurer passing over Oz, T7, and T8. Follow percentages on chart.